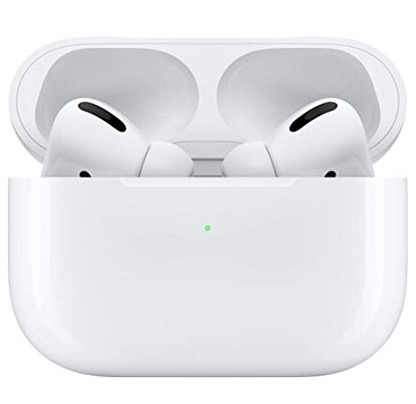 Today I received my new AirPods in the mail. What’s funny about this is that I told myself that I would never buy myself a pair of them. It’s not that I have anything against Apple. Hell, I’m a major fanboy in that I have an iMac, an iPad, an Apple Watch, and an iPhone. Yes, major fanboy here.

The reason I never considered them is because when I see people wearing them, it makes me think of a particular scene from a film entitled, “There’s Something About Mary.” And I’m not going to tell you what that scene is — you’ll have to watch the film or do a Google search (look up the term “ear” 😊).

Moreover, I was convinced that the buds never stay put in my ears. I once had a pair of wired earbuds, and they’d fall out constantly. But I became intrigued when I read that the AirPods Pro come with several tips so that no matter the size or shape of your ear, they will supposedly fit snugly. I began to become intrigued.

But a couple of events pushed me towards getting them. One was that my current pair of over-the-ear noise-canceling headphone cans died after many years of heavy use. Given that noise-canceling is an essential feature for me (I’ll chat more about that in another post), I began researching options, and the AirPods Pro ended up at the top of my list. But what really clinched the deal was that they were on sale last weekend for $50 off. I took that as a sign from the universe (hey — we have to justify our purchases somehow).

So far, so good. I like them. I think these will work out just fine.