You are here: Home / My Novels / First Novel in the Ghost Oracle Series released: Nick’s Awakening 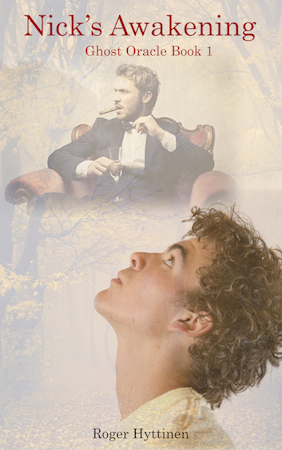 It’s official – my latest novel, Nick’s Awakening, is now available on Amazon, Barnes and Noble, Kobo, Google Books or directly from this website. Here is the blurb:

Sixteen year-old Nick Michelson has been seeing strange things lately, things he can’t explain. So when his uncle tells him that some of the men in his family can see ghosts, Nick freaks out and decides he’s going to ignore the spirits. But as he will soon learn, that’s easier said than done — especially once he encounters James Pearce, an angry spirt hell-bent on finding out who killed him. Reluctantly, Nick agrees to help. So with the help of his Tarot cards and his new mentor Katrina, Nick embarks on a journey to help the solve the mystery surrounding James’s death. But once word gets around about Nick’s ability, there’s more than one ghost vying for his attention.

This is the first book in the Ghost Oracle Series, with at least three more books to follow. Future books in the series will continue to follow the adventures of reluctant psychic medium and Tarot card reader Nick Michaelson.

If you purchase the book directly from this Website, you will get three different versions: mobi/kindle, epub and PDF.