You are here: Home / Musings / Shaving with the Dollar Shave Club 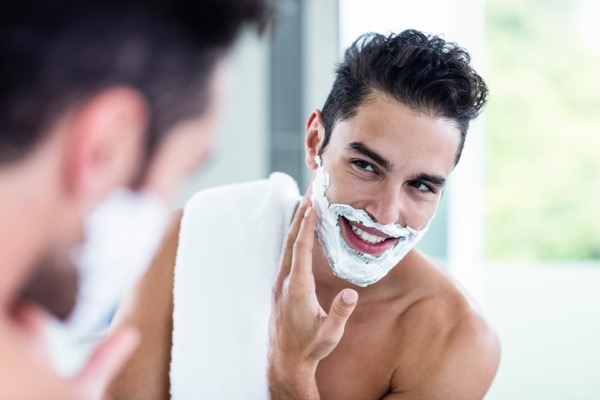 I’ve always had a love/hate relationship with razors. Well, mostly hate, actually. I’ve never been able to find a razor that worked properly with my skin. I tried every manner of disposable razors imaginable. I tried safety razors. I tried straight-edged razors with replaceable razor blades. But always, the result was the same: a face full of razor cuts, looking like I was on the losing end of a fight with an alley cat.

I used to shave at least an hour before leaving the house to ensure that the bleeding would be stopped in time (sometimes, it wasn’t). Unfortunately, shaving nearly always ended up being a highly frustrating endeavor.

Then, a few years ago, I came across a subscription box called “Dollar Shave Club.” How this works is that they send you a free razor, followed by a monthly shipment of razor blades. People who left reviews claimed that this was the first razor that didn’t cut their face to ribbons. The more I read about them, the more intrigued I became, so I finally caved and joined them.

The first time I shaved, I was amazed. No cuts! The second time I was even more shocked. I couldn’t believe that I’d finally found a razor that worked for me. I’ve been a faithful customer of theirs for several years now, and I couldn’t be happier. In the past few years, I think I’ve only nicked my face once, and that was through sheer clumsiness. There is another popular monthly shave subscription box that I tried once, but they didn’t work out for me: I nearly bled to death.

Dollar Shave Club also offers a plethora of other hygiene products, everything from moisturizers to sunscreen. I personally always use their Shave Butter (it’s way better than shaving cream, in my humble opinion) and their post-shave cream. Since I joined, they’ve changed their shipment schedule to every two months, which works out fine. I just make sure to stock up on products when it’s time to update my box.

It’s interesting to note that though their marketing is aimed toward men, I noticed there were plenty of positive comments and recommendations by women as well, who use their razors to shave their legs. So female readers as well may wish to give them a try. I just wanted to share this product with others who may have had the same difficulty in finding a razor that doesn’t cut them with each shave. So if you have sensitive skin, they might be worth checking out.

Here’s a link to their site: Dollar Shave Club