You are here: Home / My Novels / Work Update 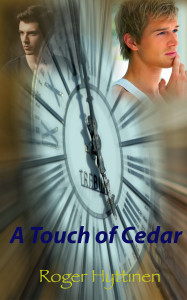 This post is just a quick update on my current and upcoming work.

A Touch of Cedar, a gay-themed time-travel ghost story is now available on Amazon Kindle, Nook, Kobo and Smashwords.

The first novel of my new YA series featuring 16-year old Medium and Tarot card reader Nick should be released with the next two months (I’m shooting for the 16th of March). Three of them have been written so far with a fourth on the way. I should have the first book “Crossing Bridges: Beginnings” for sale in less than two months.

I have decided to allow my first novel, A Clash of Fangs to go out of print. It’s been around twelve years since I wrote it and it’s a bit dated at this point. I’ve decided to rewrite it, update it and then republish it at a later date.

I have also finished my M/M werewolf novel (title not yet decided). I plan on releasing it after the Crossing Bridges 2 is completed. I’d expect to see it by mid summer.

Thanks for reading and supporting my work!