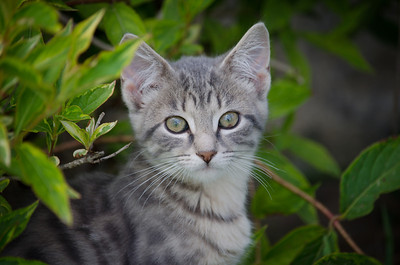 This is my “Caturday Roundup” post where my buddy Leo (the adorable kitten pictured to the right) helps me wrap up the week’s events and provide links to some interesting posts that I came across on the Web during the week.

I stuck to my writing goal of 2,000 words a day – a continuous streak since January 1st. I started second edits on my series featuring sixteen year-old Nick, a high school tarot card reader who can see ghosts. So far, I’ve completed three books in the series with three more planned out. I’m hoping the first one will be released within a month. Keep an eye out for my sexy werewolf novel coming soon as well.

As we’re still in the throes of winter here in Milwaukee, I’ve been focusing mainly on work – there will be plenty of time to play in the summer. Although every time I walk past my motorcycle in the garage, I get a little weak-kneed, waiting for spring to arrive.

Andrew Sullivan posted a short film (only 4 min.) that was inspired by the work of H.G. Wells. A beautiful, poetic work.

If sexy, shirtless French Firemen are your cup of tea, then you might want to check out this video. It features an entire fire department lip syncing to “Call Me Maybe” (the poor young men got into hot water for it too).

Another fun French video features two brothers (or brother-in-laws) who call themselves “Les Beaux Frères” and perform an incredible routine on French TV wearing only ….um… A towel.

Queen Elizabeth made the news this week. For the first time ever, according to this article, she publicly acknowledges gay people. Who wudda thunk it?

In the literary world, Anne Rice signs a petition to protest bullying of authors on Amazon.

Another author, Sarah Madison, wrote a wonderful piece entitled “Why a Middle-Aged Woman Identifies with “Frozen”. I saw this movie recently and fell in love with it! I can relate to many aspects of the film that the author mentions in the article And if you really like Frozen, check out the Spanish Version of the movie’s feature song “Let It Go” along with the words here.

Leo Babauta of Zen Habits talked in this article about what he learned as a writer. Some Great Tips here.

For my blogger or wanna-be blogger friends out there, Courtney Carver wrote a great article on the Be More With Less blog entitled How to Start a Blog with Purpose.

For my photographer friends, how about a public restroom shaped like a compact camera? It’s true and you can read about it here.

In homage to one of the worst winters in the past 35 years, TowlerRoad blog featured a video of two young men Snow Swimming of all things!