You are here: Home / Archives for Camping

I went on my first camping trip of the season at Nelson Dewey State Park (named after the first governor of Wisconsin) in Cassville, Wisconsin. Now I have heard about the park several times over the years but this was my first visit – and I was truly impressed! I didn’t realize what an awesome place this was. The sites are on a bluff overlooking the Mississippi. We chose one of the four secluded walk-in sites right on the bluff. Talk about the million dollar view! The first thing you see in the morning when getting out of the tent is the breathtaking panorama of the Mississippi river.

Right across the street from the park is historic Stonefield, a recreation of an rural village from the 1800’s. I took the tour which featured Wisconsin’s typical dairy farms and farming equipment of the era, and a typical downtown street in a farming village – complete with barber, grocery store and undertaker. The tour concluded with a tour of the estate of Governor Dewey in all of its slendor.

Close to the park was the town of Cassville. I must say that there was not much going on there. We enjoyed a wonderful breakfast at the Rivers Cafe – the servers there were a hoot! Not only were they fun and friendly, but also quite informative about the area. The only other place we ate at was the Town Pump. They had a minimal breakfast menu (eggs only!) but both the server and the cook were a tad on the surly side. Perhaps they were just having a bad morning? Not a place to which I would probably return. Cassville is an extremely quiet town so if you are looking for action, you’d probably want to head across the river to Prairie du Chien.

Now if you are the kind of person who has to be continuously on the go, it is important to note that there is not much to do in the park. There are a couple of short hiking trails but mostly, it’s a place for peace and quiet. There are, however, things to do in the area. At Wyalusing State Park, which is not too far away, you can paddle through the river sloughs as well as fish, bike and picnic. I have both canoed and kayaked the backwaters of the Mississippi there and the wildlife is both varied and abundant (you can’t spit without hitting an eagle!). There is also the city of Prairie du Chien across the river, if you want to get away from nature for a bit.

We did spend an afternoon hiking at the Effigy Mounds National Monument. There, one can find 200 burial mounds, many in the shape of bears and birds. Supposedly, the mounds were creating by American Indian tribes over 1,000 years ago. The mounds are dispersed over a beautiful picturesque landscape. Many are on top of the bluff, which is a bit of a climb initially – but the view from the top is more than worth the effort. The hike along the bluff is quite beautiful. I remember years ago taking a full moon hike there – I wonder if they still do that? 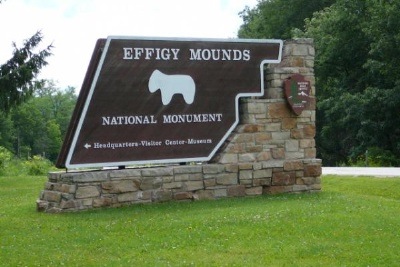 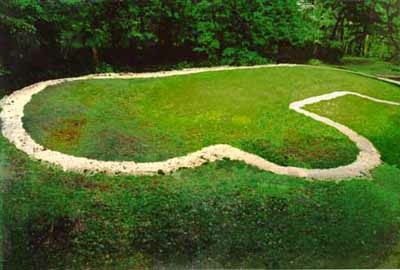 All in all, a very fun trip. I think I may plan another excursion there in the fall once the leaves change color.