You are here: Home / Archives for crows 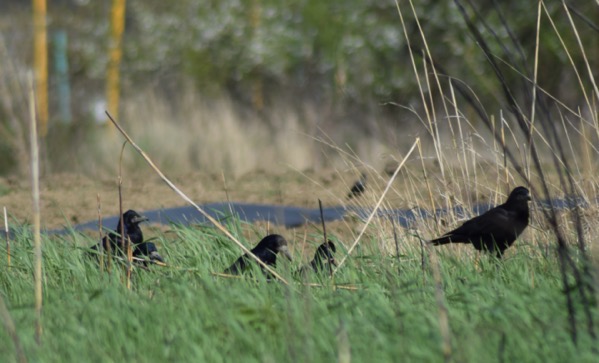 Early spring, I noticed that two crows were hanging around a lot in the front yard. I didn’t think too much of it at first until I started seeing them gather up sticks and clumps of grass in their mouths and then fly to the top of a spruce tree in my yard. Ah — The crows were building a nest.

Unlike many people I know, I’ve always loved watching crows. They are extremely intelligent birds, and I find them absolutely fascinating. So I was pretty excited to learn that I would have a family of crows living in my yard — though I will admit that I was kind of dreading the noise.

What I noticed first off was how watchful the parent crows were before the little one was even born. I saw that whenever I walked into the bathroom, a crow flew down to the telephone pole outside. At first, I thought it was a coincidence, but pretty soon realized that apparently, it noticed movement from my bathroom came to investigate. That being said, I soon noticed that there was always one of them on lookout duty, either in a tree watching or on a wire or pole. They would fly around the parameter of our property in the same circle, patrolling on a regular basis. Intruders such as hawks or owls were quickly and ruthlessly driven from the neighborhood.

I found it particularly interesting that they also drove out all the squirrels in the neighborhood. Every time I saw a squirrel in the front yard, a crow would immediately swoop down to attack it and would continue to do so until the rodent ran across the street. Though we think of squirrels as basically vegetarians, they are known to eat the eggs of other birds (and maybe even baby birds as well).

When the baby crow was born, that’s when the fun began! I’m not sure how many offspring crows typically have at a time, but these two had only one, which we nicknamed “Junior.” I sat for hours on my deck watching the parent crows teach Junior how to fly, how to land properly on a branch, how to land on a wire next to the telephone pole, not in the middle of the wire, etc. It seemed as though there were carrying on detailed conversations at times — and who knows, maybe they were.

One day, four other crows appeared in the yard, and they spent the day hanging out with “my” three crows. We joked that Auntie, Uncle, and the cousins came by to see the new baby.

Surprisingly, the crows were not all that noisy. It was mainly the baby crow that concerned me as I know from experience that begging, baby birds can make a horrendous racket (I pitched a tent once near a nest housing a baby Kestrel – huge mistake!). Junior wasn’t all that noisy though there is a lot of cawing going on as the crows converse back and forth.

I found it surprising how much the crows got used to us. Crows often are very shy around people and tend not to get too close. These crows pay us no mind at all. One landed on the railing of the deck next to me, not more than five feet away. When we leave the house, they never fly off — just sit and watch. However, if we have a visitor, that’s different — the crows stay far away. It appears as if they specifically recognize us and know that we’re okay.

Some of you may find this all a bit silly — gushing about a family of crows. But it’s really been quite a bit of fun watching them and learning more about these fascinating birds. I’m curious to see how long they’ll stick around.