You are here: Home / Archives for djinn 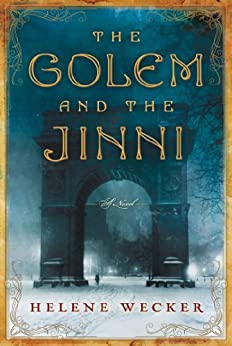 I just finished a book entitled “The Hidden Palace,” which is a sequel to The Golem and the Jinni by Helene Wecker. This was a book I read a while ago and loved so much that I would check every couple of months to see if the sequel was available.

But I’m not going to talk about the sequel today, but about the first book in this duology: The Golem and the Jinni. I’m not planning on doing a lot of book reviews here, but when there’s a book that I especially like and stands out for me, I want to share it with others.

Our story begins when a golem, a creature of Jewish folklore made of clay, is created using Kabbalistic magic by a former rabbi, now turned dark magician. Not yet awakened, she (it’s a female Golem) and her new master head from Poland to America to begin a new life. The plan was to awaken his Golem once they arrived in America, but the man could wait no longer. So he excitedly opens this Golem’s crate and awakens her. But she barely has a chance to get to know her master when he suddenly dies on the ship from a burst appendix.

Now masterless, confused and frightened, she finds herself in New York in 1899. Luckily, a local Rabbi recognizes her for what she is and offers to help her integrate into this strange new society. New for her, that is, as she’s only been alive for a couple of days. Given that he can’t simply refer to her as “The Golem,” the Rabbi names her “Chava.”

The second creature in our story, a Jinni, a creature of Arabic folklore who is given the name Ahmad, is perhaps more commonly known as a Djin or a Genie. The Jinni is a creature of fire and was born in the ancient Syrian Desert over a thousand years ago. He is released accidentally from a flask by a tinsmith. When the Jinni awakens, he notices that he wears an iron wrist-cuff which means only one thing: that he was trapped in the flask by a wizard and has been inside the flask for over a thousand years. The Jinni has no memory of the wizard nor how he came to be in the flask.

So the story follows both the Golem and the Jinni as they try to fit in with their immigrant neighbors while hiding who — or should I say what — they really are. It’s a beautiful tale of two creatures trying to fit into a world they don’t understand.

One night, they haphazardly meet by chance on the streets of New York, and an unlikely friendship develops between the two. But then a dreadful incident occurs involving both of them, and because of it, the two of them retreat into their own world and stop seeing each other. In this way, their relationship is not only interesting but also quite complex.

But things change when a powerful evil — the villain of our story – arrives in town, and we learn he is someone who is a link between the two of them. His arrival threatens both the Golem’s and the Jinni’s existence, bringing them back together once again out of necessity.

I thought it was fun how this ended up being the story of opposites, with the fiery, free-spirited, womanizing Jinni on the one hand and the stoic, overly cautious, almost prudish Golem whose sole purpose is to serve a master, on the other. And even their age is miles or should I say centuries apart, with the Golem being just days old and the Jinni well over a thousand years.
Speaking of the characters, I’d have to say that the meticulous character development is profound and pretty much ongoing throughout the entire novel, making reading this all the more fun.

Though she was only recently brought to life, I love how Chava possesses an all-too-human empathy toward others. On the day of her arrival in New York, she steals food to give to a hungry boy. She is definitely the more emotional of the two creatures and extremely sensitive to the feelings of others, as we see in her caring for her Coworker Anna. This might have something to do with the Golem’s ability to hear the thoughts and know the desires of the people around her.

The Jinni, on the other hand, is wilder, passionate, and much more rash than the Golem. He’s willing to explore his new world, whereas the Golem approaches it more hesitatingly, more cautiously.

But no matter what happens to them, we always need to remember that the Golem and the Jinni are two creatures tied to their natures, no matter how much they may wish to convince themselves otherwise.

In this way, the author brings her characters to rich life, letting all of them thrive in their complexity and near-humanness. However, I did find it especially interesting how whenever these two creatures got together, they always ended up deeply discussing the human condition, an interesting topic for two non-human creatures.

Another thing that really worked for me in this story was the exquisite world-building. It’s apparent that the author did an incredible amount of research for this novel – research into setting both turn-of-the-century life in New York as well as the Syrian Desert of old, research into culture, religion, into the different groups of people represented in the story, into cultural magic as well religious mysticism. The author does an expert job integrating these details into the story while never thrusting an information dump onto us, and at times, I felt as though I really were in another place and time. We also get a riveting look into both the Jewish and the Arabic immigrant subculture communities of the late 19th century.

This book is fabulous! It’s one of the most surprising and engrossing books I’ve read in a while, with plenty of action and drama to keep me interested in what happens next. It’s a wonderfully rich and fascinating story of mystical creatures, old magicians, and ancient cultures with a unique, well-developed plot that was all brought together into a marvelous conclusion. So in this way, it was both a plot-driven and a character-driven story.

But not only was it engaging, but it’s also a remarkable study of human nature and includes such themes as religion, diversity, duty, choice, desires, loneliness, free will and freedom, religious faith or the lack thereof, tradition, and loving our neighbors.

So if you’re in the market for a unique and compelling story and don’t mind a bit of “woo-woo,” this book might fit that bill.