You are here: Home / Movie Reviews / Film Review: The Giver 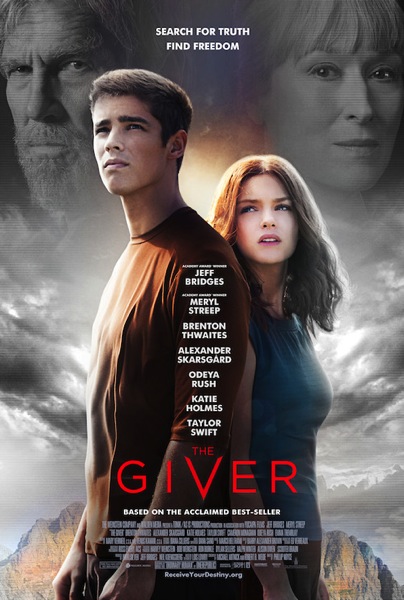 “When people have the freedom to choose, they choose wrong. Every single time.” ~ Chief Elder

My bookclub recently read the book The Giver by Lois Lowry which resulted in an interesting and lively discussion, so I was quite excited when I heard that the book was being made into a movie. I saw the movie the other night and I absolutely loved it! This was not one of those movies that was completely true to the book as there were a good number of differences between the two but overall, I was pleased with the director’s interpretation.

The Giver takes place in a colorless utopian society where there is no inequality, competition, anger, pain, hunger, war, fear, lust, sexual attraction, or different races. It is a place where the safety of sameness is the aim and differences of any kind are not tolerated. The community operates on a strict set of rules and not following them results in being released to Elsewhere. Everything is gray, sterile and orderly but nobody seems to unhappy. In fact, the community citizens seem quite content with their emotionless day to day lives.

The story centers on Jonas, a young man seemingly satisfied with his place in the community. During the yearly ceremony where those graduating are told what their life’s work shall be, Jonas is set apart from the rest of his classmates. Rather than given a typical occupation, is told instead that he has been chosen to become the community’s next Receiver of Knowledge, an honor that is rarely bestowed as there is ever only Receiver in the community. Jonas is to begin his training immediately with the current Receiver, played by Jeff Bridges. In the book, Jonas is 12 years old, the age where each person in society is given his or her official occupation; that is to say, the role they are to play in the community for the rest of their lives. In the movie however, the character of Jonas is played by Brenton Thwaites who appears to be about seventeen or eighteen years old (I don’t recall if they mentioned Jonas’s actual age in the film), as do Jonas’s friends, Fiona and Asher. Jonas’s age in the movie is quite a departure from the book and from what I’ve heard, some people took issue with the change. Truth be told, while I was reading the book, I had a difficult time believing that Jonas was only twelve years old, especially given the enormous responsibility laid on his shoulders and the level of maturity he displayed. Portraying Jonas’s age closer to that of a high school senior makes more sense to me.

The Receiver (or Receiver of Knowledge) is the sole keeper of all of the community’s memories. Nobody, including the governing elders, knows anything about human history or their ancestors’ past – all memory of it has been erased from their minds. The Receiver is the only individual in the community who retains all of the memories from the past and using those memories, he is called upon from time to time assist the elders in making difficult decisions. Since Jonas has been designated the society’s new Receiver, the current Receiver then becomes “The Giver” and his role is to pass on all of his memories to Jonas, which he does by touch. The film starts out in dim black and white but gains more color as Jonas gains an understanding of real life. As Jonas receives more and more memories from The Giver, he begins to question the wisdom in removing all those memories and emotions from everyone’s mind – and once he begins to receive some of the more painful memories from The Giver (and the painful emotions that go along with them), his questions become even more profound. On some level, he understand why his ancestors did away with all the painful emotions, memories and even colors – but he begins to think that the sacrifice in attaining a safe society wasn’t worth what humanity has lost in the process. He starts to comprehend all too well what shutting down emotions and memories did to their community – everyone had stopped truly living. Once he learns his society’s secrets and darker truths, Jonas’s sense of morality grows, and with it, his need to see things restored to the way they should be. Finally he and The Giver, in a race against time, embark on a plan to set the community back to the way it once was – complete with memories, emotions and colors. It is time to right the wrongs.

The ending of the movie includes some aspects that were not included in the book which I felt worked well. For instance, the movie raised the stakes of Jonas’s success – and it becomes a matter of life and death, not just for him but his friends as well. I liked the extra suspense that the movie added to the story and I thought Jonas’s relationship with the Head Elder (played my Meryl Streep) was expertly handled. There seemed to be much more depth to the character of the all-powerful Chief Elder in the movie than in the book, no doubt helped by Steep’s stellar performance. On the opposite end however, I felt that the movie did leave out some important details – details that helped to support the central themes of the book

Though there were several changes to the details from the book to the movie, the director left the conclusion/denouement of the film idential to that of the book so much so that with the exception of the age of Jonas, the ending of the movie was nearly exactly what I had pictured in my head while reading the book. Sure, several of the events leading up to the ending changed in the movie, but the actual ending stayed true to Lowry’s novel. What is interesting, is that at first glance, the film’s ending seems cut and dry. But there is more than one possible interpretation of what really occurred, which by the way, led to quite an interesting and emotional discussion during my bookclub’ meeting’s discussion of the story. What are these two interpretations or understandings of the ending you might ask? You shall have to watch the movie (and perhaps read the book as well?) to find out.

I was amazed by the lukewarm response that this movie received. While the film certainly could have perhaps delved a bit deeper into the main ideas of the book, I still thought it was an excellent interpretation of the original story with well-developed characters and superb acting. The Giver is not a light, fluffy movie given that it deals with topics such as a freedom, liberty, totalitarianism, what gives life meaning, conformity, freedom of expression and even murder. The Giver is also not an action-packed thrill ride. What it is, is a film that illustrates big ideas – ideas that cause us to contemplate, wonder and ponder. It’s a haunting movie that will stay with you long after the film is finished. Recommended! Note for True Blood fans: Alexander Skarsgård (Erik Northman in True Blood) plays Jonas’s father.