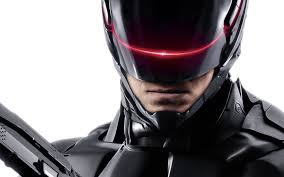 Went to the movies last night to see Robocop. I saw the original way back in 1987 when it came out and recall that I enjoyed it at the time, although I don’t remember too much of the plot. I wasn’t sure what to expect with the 2014 version as often, I’m disappointed with remakes (with Carrie being a prime example). But I ended up enjoying the movie much more than I thought I would. While there indeed was a lot of shooting, I seem to remember the 1987 original as being much more violent — but perhaps time has affected my memory.

The year is 2028. OmniCorp, a center for worldwide robot technology, has succeed in placing robot drones on the streets as peacekeepers in many countries, with the United Stated being the exception. In the US, a law prohibits the use of drones. Just when it looks like OmniCorp’s latest attempt to instill drones in the US will fail, Alex Murphy, a Detroit Police Officer played by Joel Kinnamon, is critically wounded in an explosion after investigating some possibly corrupt officers on his force.

The CEO of OmniCorp played by Michael Keaton, seizes this opportunity and uses what’s left of Office Murphy to create a half-man, half-robot police officer called Robocop (actually, he’s more robot – not to much left to him beside brain, heart, lungs and one hand). He is put on the streets and almost immediately, crime in the city is reduced by 80%. But there is a lot more going on here, from corrupt police officers to evil corporate maneuvers — and of course, one key fact that the scientists and corporate monkeys seem to have forgotten: it is still a man inside the machine, complete with fears, anxieties, love and a thirst for vengeance.

While there were several clichés present in the movie such as “one man stands alone against the evil corporation”, I enjoyed the film. It was fast-paced with well-orchestrated action scenes and great acting all around. Samuel L. Jackson (he’s been in everything lately) does an fantastic job as a pro-drone over-the-top game show host and Gary Oldman who plays Dr. Dennett Norton, the scientist responsible for Murphy’s transformation from man to machine, is convincing as his portrayal as the corporate scientist with a heart.

While the 2014 movie might not be as bloody as the original, there were a couple of cringe-worthy scenes, one during which the machine is stripped from Office Murphy and we see how little of Robocop is actually a man — all that’s left of Murphy is his exposed brain, heart, lungs and right hand — an eewww moment for sure. Speaking of his hand, I thought it amusing that when he was first revealed, it was his left hand that was human but later on in the movie it was his right. Whoop….little continuity problem there. But confused hands aside, I enjoyed the movie and feel that it’s worth a view.