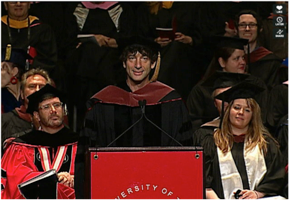 I’ve been a fan of the author Neil Gaiman for many years now and have enjoyed such books asAmerican Gods, Anansi Boys, Coraline and Stardust as well as the Sandman comic collection. So I was more than delighted when I stumbled across his 2012 commencement address to the University of the Arts Class in Philadelphia.

The talk was inspiring, motivating and a worthwhile view for anyone in the creative fields, especially novelists. Below are some of my favorite points of his talk.

Neil states that a career implies some sort of career plan and that is something he never had. I could relate to this on so many levels. Each time I tried to plan out my future career-wise, I would inevitably fail (mainly due to losing interest) and instead, I simply ended up doing what my heart directed me to do. I tried computer programming, teaching at a University, finance – “proper jobs” in other words, only to end up following my own dream at the end of it . So I kind of ended up doing what Neil did: creating a list of things I want to do and scratching them off when done. This kind of leads into his next point:

IT’S BEST TO HAVE NO IDEA WHAT YOU’RE DOING

DO WHAT YOU NEED TO DO

In his talk, Neil said that if you have an idea of what you want to do, you need to go ahead and do it! But be prepared: you may have to do things in order to reach your goal. For example, in order to learn to be a writer, Neil spent time being a journalist. One cannot simply decide to be a doctor or dentist without obtaining proper training (you’d get arrested and/or sued). Thus, if one wants to be writer, one needs to put in the time writing and learning about the craft. I personally am always reading some book about writing or taking creative writing workshops when available. One never can be “finished” with learning.

DEALING WITH THE PROBLEMS OF FAILURE

This is advice that I’ve heard several times – Learn to be thick-skinned. That is a lot easier said than done, especially when your work is the brunt of a scathing review. But we do have to realize that not all of our projects will succeed; hell, some of them won’t even make it out the front door. I remember one author saying, “Keep putting stuff out into the world. The more you put out, the more likely one of them will be a success…and the more your put out, the better your work will become.”

DEALING WITH THE PROBLEMS OF SUCCESS

I had a good chuckle when Neil talked about “The Impostor Syndrome” – the idea that others will figure out that we nothing but a fake and not really qualified to be a writer, an artist, or whatever. Once we start becoming successful, many of us feel as though we are getting away with something and that sooner or later, people will figure us out. I remember feeling this way for years when I was a French teacher at a university – I feared that someday, someone would come up to me as say, “What are you doing here? You’re not qualified to teach French. Why you cannot speak French at all!”

He also said that when we get to the point where you feel that you are exposing too much of yourself to the world, that things are getting too personal, too raw, that is is the moment where you are starting to get it right.

Get out into the world and make mistakes. While addressing the class of 2012, Neil said to them, “I hope you make mistakes. Making mistakes means you’re out there doing something.”

DON’T DO IT ONLY FOR THE MONEY

Don’t do it only for the money because you will end up getting bored with your project and losing your enthusiasm for it. Neil said that anytime he did something only for money, it rarely ended up being a success. Instead, do work you are proud of – and the success (and money hopefully) will follow. I have found this to be true in my life on more than one occasion.

FINDING YOUR OWN VOICE

Neil stressed the importance of finding your own voice. While copying the technique of others is okay in the beginning (many of us copy the style of others without realizing it – it’s how we learn initially), eventually, we need to find our own voice and make the kind of art of which only we are capable – or as Neil put it “Write as only YOU can.”

The best piece of advice that Neil ever received was from Stephen King who said, “Enjoy your success.” I think that this is helpful advice for many of us. Instead of worrying about the next deadline, the next project, what the reviews will be like, etc., we need to relax a bit, let go, have fun and enjoy the ride. Revel in your successes!

Neil closed by talking about how the nature of distribution is changing and how the distributions channels for creative people are in flux. As he put it, the gatekeepers are leaving their gates and now we can be as creative as we need to be to get our work seen. Today, there are new rules but nobody as of yet, is quite sure what those rules are. So we make our own rules. This can seem frightening and intimating – but also intensely liberating, as Neil states. That’s what I’m finding, is the most fun of all!